skip to main | skip to sidebar


Continuing our exploration of the works of H.P. Lovecraft as presented in comic book form, today we examine Creepy Issue 21. 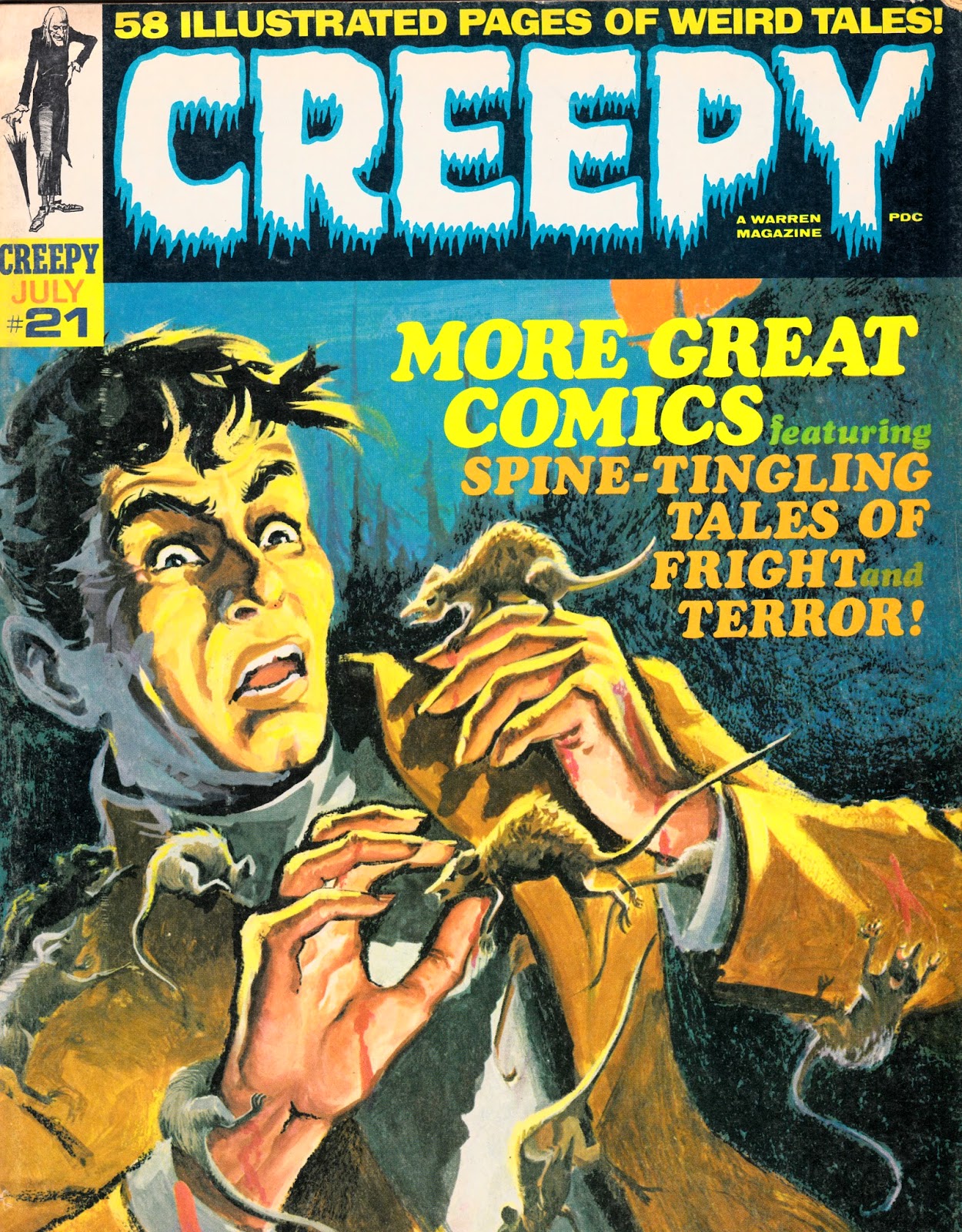 Introduced in 1964, Creepy was one of three illustrated horror magazines produced by Warren Publishing (the other two being Eerie and Vampirella). Featuring outstanding macabre color covers and black-and-white interior art, Creepy and Eerie stylistically mirrored classic EC Comics horror publications. Creepy even boasted a sinister host in the form of Uncle Creepy.

Creepy went through a string of editors in its formative years, beginning with Russ Jones and including Archie Goodwin, Bill Parente, Nicola Cuti and even publisher James Warren. Contributing artists included such prominent names as Frank Frazetta, Steve Ditko, Neal Adams, Alex Toth and John Severin. The magazine originally ran from 1964 to 1983.

For Lovecraft devotees, Creepy Issue 21 is notable for its inclusion of “The Rats in the Walls.” Bob Jenney provides the atmospheric artwork. The adaptation captures Lovecraft’s tone, though the truncated climax isn’t as effective as the author’s original ending. 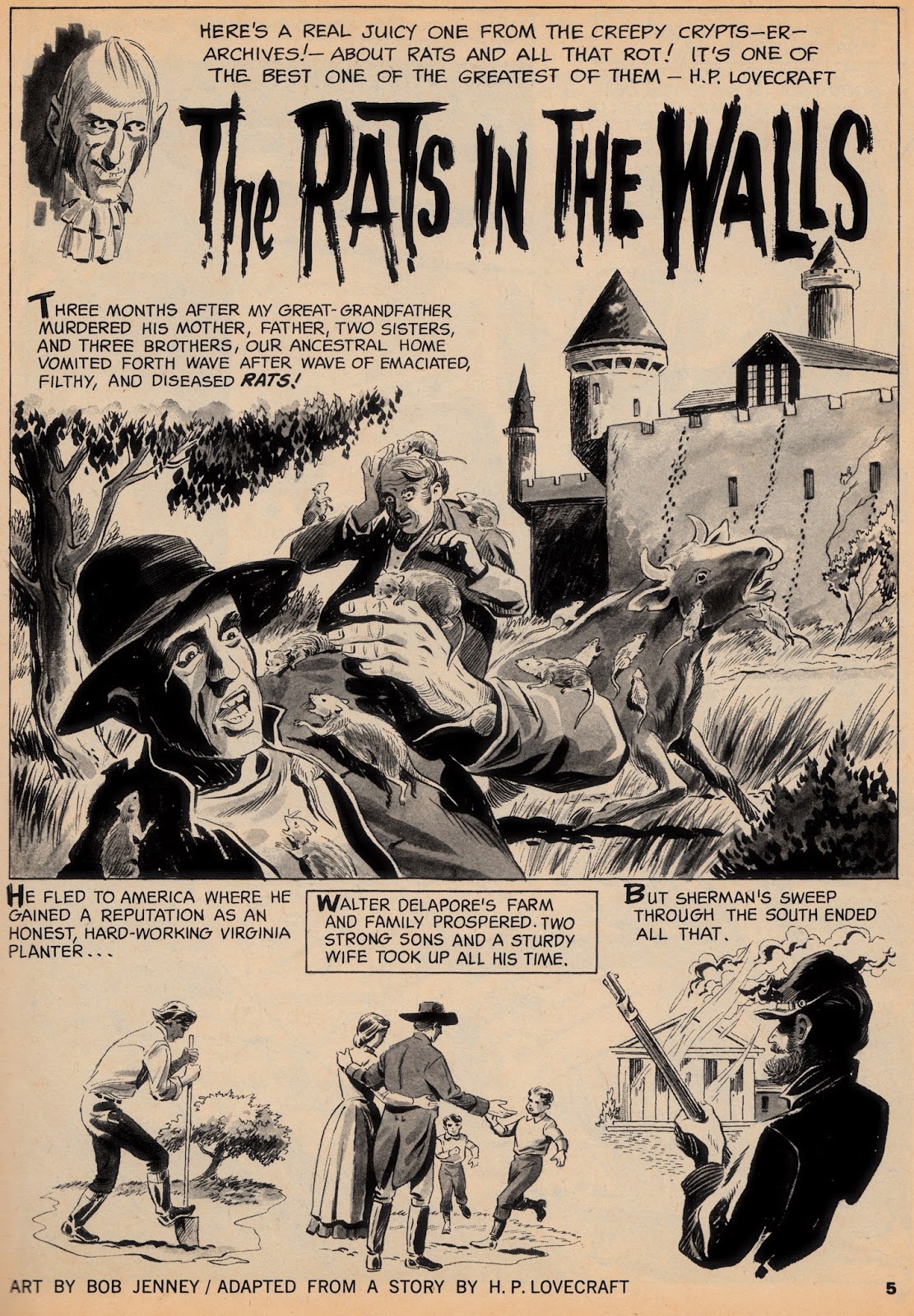 Jenney apparently enjoyed a long career in illustration, active from the 1940s through the 1980s. During those years, he worked on at least two syndicated comic strips, provided artwork for children’s books and was employed by an advertising agency. Busy as he was, he still managed to find time to serve as an artist for Warren Publishing.

Creepy Issue 21 hit the newsstands in June 1968. A near mint condition copy is currently listed at just over $40 at one online comic book shop. On the other hand, Dark Horse Comics began reprinting Creepy archival volumes in 2008. This issue is included in Creepy Archives Vol. 5.

Say … have you checked out the Indiegogo fundraising campaign for the forthcoming World War Cthulhu anthology? Edited by Brian M. Sammons and Glynn Owen Barrass, this collection will feature work from authors such as John Shirley, Mark Rainey, Wilum Pugmire, William Meikle, Tim Curran, Jeffrey Thomas and many others. If you haven't already contributed, today would be a good day to do it: If the campaign reaches 80 percent of its goal by 11 p.m. PST today, Friday, March 14, artist Wayne Miller will create a new illustration for Wilum Pugmire's tale "To Hold Ye White Husk." And remember: Those stretch goals are mighty important, too. More funding means more authors and more art!

So what are you waiting for?


Posted by Lee Clark Zumpe at 8:22 PM No comments:

As promised, today I will begin showcasing some of my treasured possessions here on Muted Mutterings of a Mad Poet.

Anyone familiar with my fiction and poetry probably recognizes my admiration of H.P. Lovecraft’s tales of cosmic horror. Anyone familiar with me personally knows I have an unfortunate obsession: In addition to being a bibliophile, I also collect comic books. My attraction to comic books began when I was a still quite young. I can remember my first acquisition: I was suffering from some mild strain of the flu, around age 5, when my father arrived home with an issue of a one of Marvel’s horror titles. This happened to be right about the same period during which I was devouring old horror movies on television with unspeakable glee.

When asked about my first experience reading Lovecraft, I have to admit that it was likely in the pages of a comic book. Many titles have featured adaptations of Lovecraft’s work over the years – and I can claim with confidence that by the time I was 7 or 8, I had read more than a few. 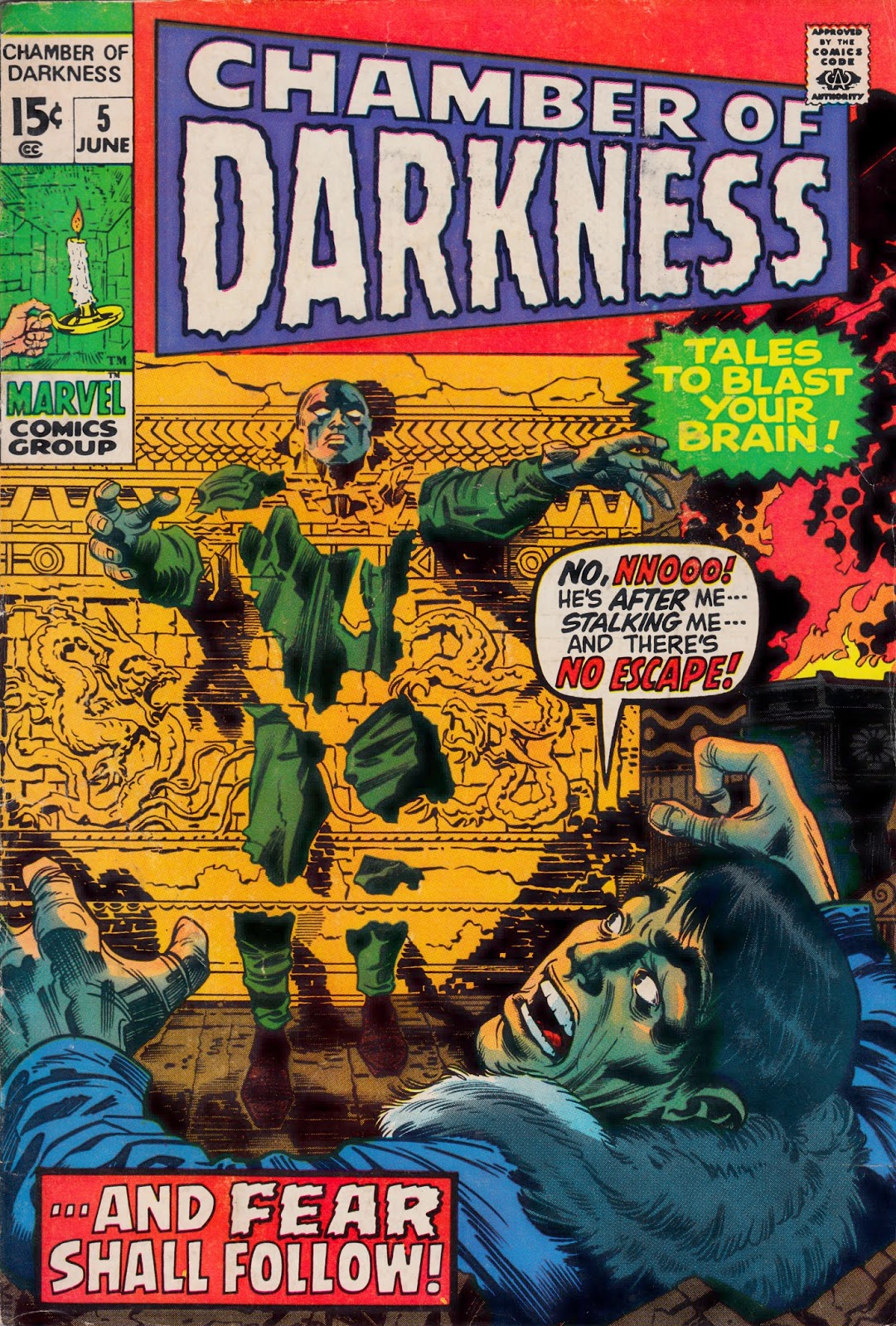 I’ll begin this marathon of Lovecraftian comic books with one of those Marvel horror titles: Chamber of Darkness, Issue 5. Published in June 1970, this issue included the tale “The Music from Beyond!”, an adaptation of “The Music of Erich Zann.” Scripted by Roy Thomas, the tale featured art by Johnny Craig. Craig came to Marvel with an impressive background, having worked on a number of EC titles in the 1940s and ’50s, including the popular horror anthologies The Crypt of Terror, The Vault of Horror and The Haunt of Fear. He also worked for Archie Goodwin at Warren Publishing’s magazines in the mid to late ’60s.

Copies of Chamber of Darkness are readily available through online comic book dealers. One in fine condition can be acquired for less than $10.

Stop back in tomorrow evening to see what I’ll dig out of the library. 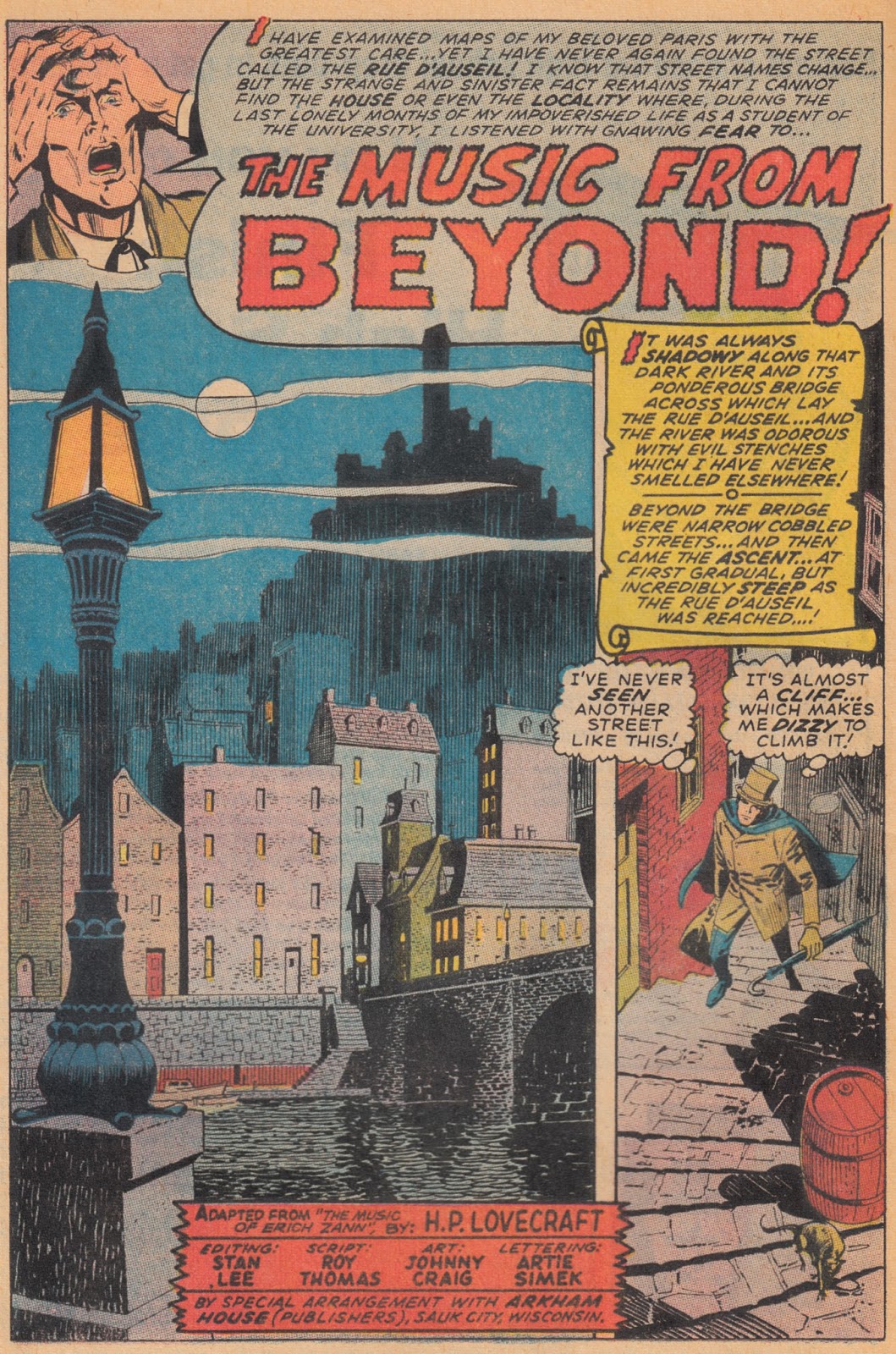 By the way – if you’re into Lovecraftian fiction, don’t forget to support the current Indiegogo fundraising campaign for the forthcoming World War Cthulhu anthology. Edited by Brian M. Sammons and Glynn Owen Barrass, this collection will feature work from authors such as John Shirley, Mark Rainey, Wilum Pugmire, William Meikle, Tim Curran, Jeffrey Thomas and many others.

Posted by Lee Clark Zumpe at 8:46 PM No comments:


Chronic Blog Stagnation … such a demoralizing phenomenon.
For a writer, it’s shameful: Summoning up a few hundred words several times a week should be painless, uncomplicated … even, dare I say it, fun.

Yet here sits this moribund blog, untouched for well over a year, its promises unfulfilled, its followers forsaken.

Oddly enough, I think I was on to something interesting when last I posted a handful of entries. Excavating oddities and rarities from my overcrowded library to share with like-minded authors and artists seems a noble enough endeavor, does it not? I believe it is time to dig up more of those small press curiosities in my collection to reveal to the fervent masses. I will also disclose some of the works that influenced my own writing – pulp magazines plucked from obscurity at flea markets, classic paperback horror anthologies and, of course, comic books.

Comic books – that’s where I will begin. In order to draw attention to the current Indiegogo fundraising campaign supporting the forthcoming World War Cthulhu anthology, tomorrow I will kick off a marathon of blog entries devoted to Lovecraft in comic books. 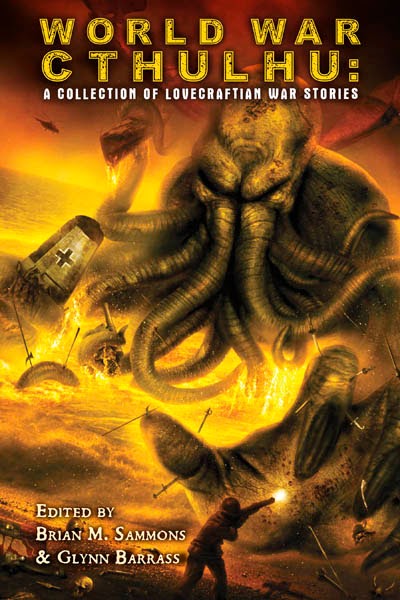 In the meantime, why not go watch the new promo video for WorldWar Cthulhu trust me, if you like horror – and if you particularly enjoy Lovecraftian horror – you’ll want to learn more about this first-rate anthology edited by Brian M. Sammons and Glynn Owen Barrass, set to be published by Dark Regions Press.

Posted by Lee Clark Zumpe at 7:27 PM No comments: 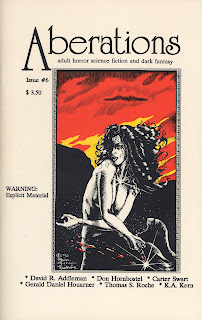 Favorite short story:  Thomas S. Roche’s “Alice” is easily the most haunting piece in this issue, but I have to admit that I thoroughly enjoyed the dark humor of Don Hornbostel’s “The Fast Feast.”  Hornbostel nicely captures and encapsulates the grim absurdity of 1980s post apocalyptic wittiness.

Favorite poem:  Both of Kimberly Wade’s poems stood out, but of the two, “Acid Tears” really won me over with its melancholic language.
Posted by Lee Clark Zumpe at 9:13 AM No comments: 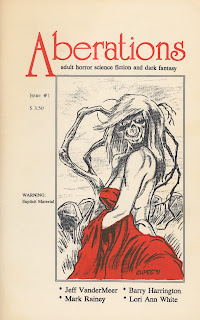 Favorite short story:  “The God of Byzantium,” by Mark Rainey.  Arcane gods, a thirst for revenge and a seedy adult bookstore make this graphic nightmare a memorable tale.  Rainey’s marvelously sleazy details left me wanting to cleanse my hands with antibacterial gel.

The quality of the artwork is fair to fine.  One illustration that particularly caught my eye:  Artist Richard Dahlstrom’s on page 45 – very reminiscent of images routinely found in 1970s horror comic magazines like Eerie and Creepy.  The artist has a gallery and a website: www.dahlstromgalleries.com.
Posted by Lee Clark Zumpe at 5:04 AM No comments:

It has been about two years since new content appeared here at Muted Mutterings of a Mad Poet.  The thing is, over the last couple of years I’ve hardly had time to write anything – fiction, poetry or witty, informative blog entries.  Besides, Muted Mutterings had mainly degenerated into a self-promotion page … a place to share sales and recent publications.

These days, I do all that plugging on Facebook.

So, recently, I started working on a website.  It’s moving along nicely, and should be up and running within the next month.  It will have its own blog, too, where I can share publishing news.

So, what to do with Muted Mutterings of a Mad Poet …

I’ve decided to use this space to post informal reviews:  I’ll be unearthing some gems from my personal collection and discussing them here – things like long-lost small press publications, old pulp magazines and some of the books, anthologies and comic books that influenced or inspired me along the way.

Posted by Lee Clark Zumpe at 6:47 AM No comments:

Comments:
Not bad as far as submissions and acceptances go, but next month I plan on boosting my output dramatically. I have a number of stories I’ve left in limbo far too long … and I intend to get through all of them in the next few weeks!
Posted by Lee Clark Zumpe at 9:27 PM 2 comments:

Lee Clark Zumpe
Lee Clark Zumpe, entertainment columnist with Tampa Bay Newspapers, earned his bachelor’s in English at the University of South Florida. His nights are consumed with the invocation of ancient nightmares, dutifully bound in fiction and poetry. His work has been seen in magazines such as Weird Tales and Dark Wisdom, and in anthologies including Horrors Beyond, Corpse Blossoms, Arkham Tales, High Seas Cthulhu and Frontier Cthulhu.

Edited by William Jones, this anthology investigates the sleeping terrors stirred by pioneers who explored the frontiers of North America. Includes Lee Clark Zumpe's "Where Men Had Seldom Trod" as well as works by Tim Curran, Ron Shiflet, Darrell Schweitzer and others. 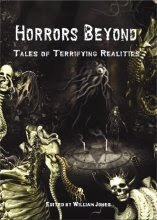 This Elders Signs Press anthology explores the strange science, the alien beings and the unseen horrors that have long been hidden from the eyes of humanity. Includes Lee Clark Zumpe's "The Breach," as well as stories by Tim Curran, Ann K. Schwader, Brian M. Sammons and others.

Edited by William Jones and published by Chaosium Inc., this anthology explores legends of the haunted city. Includes "What Sorrows May Come" by Lee Clark Zumpe as well as stories by C.J. Henderson, Brian M. Sammons and John Goodrich.